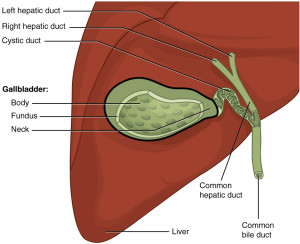 Surgery of the Biliary Tract

There are 3 main techniques for dealing with obstructive biliary disease.

This technique should be used if you are unable to catheterise the common bile duct at the duodenal papilla. This is performed through a small enterotomy on the anti-mesenteric surface of the duodenum in the area of the duodenal papilla. The papilla is visualised on the internal mesenteric surface of the duodenum. A small feeding tube is then introduced into the papilla and gently advanced into the gallbladder. If this tube is able to pass into the gallbladder and bile flows through the tube choledochal stenting should be performed. If the tube cannot be passed and the obstruction cannot be removed then a cholecystoduodenostomy should be performed.

On the rare occasion that there is a choleolith in the common bile duct this can be removed via a small incision into the bile duct over the obstruction and sutured closed with fine monofilament absorbable sutures. The common bile duct should be stented to divert bile from the incision site while it heals. To perform a cholecystoduodenostomy the gallbladder is bluntly dissected out of the fossa between the respective lobes of the liver usually using gentle digital manipulation. Care must be taken not to damage the first cystic ducts that run into the common bile duct. Severe haemorrhage can be controlled by application of a haemostatic agent such as Surgiceltm or Perclottm. The freed gallbladder is placed on the enterotomy previously performed to ensure there is no tension on the intended anastomosis site. This enterotomy should be in the region of around 3-5 cm as stoma smaller than 2,5cm are predisposed to recurrent obstructions from stricture formation. The gallbladder is now sutured to the far side of the enterotomy as the surgeon looks at the site with a continuous monofilament 3-0 or 4-0 absorbable. An incision is now made in the gallbladder to match the enterotomy. The near side of the gallbladder incision and enterotomy are now sutured in the same fashion. The area should be checked for leaks and a liver biopsy taken. Any abnormal lesions in the area of the bile duct, duodenal papilla should be biopsied to rule out neoplastic disease as a cause of the obstruction or confirm pancreatitis. Complications include haemorrhage, incisional breakdown and peritonitis, stricture of the stoma, ascending cholangitis and gastric ulceration.

This is a very simple technique that can be used if the common bile duct can be catheterised through the enterotomy. This is ideal for traumatic tears of the common bile duct, reversible obstructions or removal of choleoliths in the common bile duct. A small feeding tube is passed into the duodenal papilla. There should be good flow of bile through the tube. The largest size that will fit should be chosen but not too large to damage the papilla. The tip is cut leaving 3-4 cm of tube in the duodenum. Always place a stay suture in the end of the tube before cutting it as to not lose the end in the common bile duct. The duodenal end is now sutured to the submucosa of the duodenum to keep it in place. An absorbable monofilament should be used. The theory behind this is that once the cause has been reversed or the common bile duct has healed the suture will dissolve and pass out in the stool. The stent can be removed via endoscopy if it has not passed out in 2-3 months. The stent can lead to ascending cholangiohepatitis if not removed or passed out.

This diverts bile from the biliary system to an external collecting system. This can be done rapidly in compromised patients and does not alter the anatomy of the biliary system. It can only be used as a temporary solution in patients with permanent obstruction or in patients with a temporary obstructive disease. It should only be done when the gallbladder wall is considered to be healthy. A Foley’s catheter is placed through the right lateral wall of the abdomen. This Foley’s is then placed through a stab incision in the apex of the gallbladder. A purse string is placed around the incision and the cuff inflated of the Foley’s. This is connected to a collection system externally and bile is diverted. 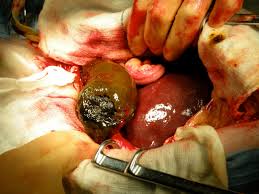 Johnson AG, Stevens AE: Importance of size of the stoma in cholecystoduodenostomy. Gut 10:68–70, 1969