Any tumour growing within (dermal), on (epidermal) or even under the skin (subdermal) should be considered a skin tumour. Some skin tumours are benign (i.e., slow-growing, completely curable with complete resection and don’t spread) while others are malignant (faster growing, invasive, sometimes incurable, and may spread to other organs). In order to classify what type of tumour you are dealing with, you will need to make a fine needle aspirate or take a biopsy A biopsy can either be incisional or excisional. Whichever course is taken, a microscopic diagnosis must always, always be obtained.

No two tumours of the same kind look the same, but very different cancers can appear similar When tumours are inflamed or infected, the underlying pathology can be masked. This information is very important. If it’s a cytological or incisional, this information can help guide you as the best approach to cure not only the obvious lump but also manage the precancerous lesions that surround the obvious tumour. Not all skin tumours are best removed surgically! Only very small (1 – 2 cm on the body or neck, and <1 cm elsewhere) should be removed by excision.

Many clients and vets try to economise by removing small lumps instead of taking the extra step – this can drastically alter prognosis, by spreading tumour cells.

Although theoretically any tumour can occur in the skin, we classically think of just a few types when we say “skin cancer” – squamous cell carcinomas (SCC), melanomas, haemangiosarcomas (HSA) and mast cell tumours (MCT).

Actinic keratosis (AK), also known as solar keratosis or senile keratosis, is a very common lesion occurring in susceptible humans as a result of prolonged and repeated solar exposures. The action of ultraviolet radiant energy, principally UVB, results in damage to the keratinocytes and produces single or multiple, discrete, dry, rough, adherent scaly lesions. These premalignant lesions may, in time, progress to squamous cell carcinomas.

This is very important as a warning sign and should be the first thing you teach clients about. A couple of veterinary-specific manifestations of AK are the “comedones” or “blackheads” seen on cat’s noses (fig 1) and dogs’ ventra. These lesions can be managed with protection, (fig 2) imiquimod or Photodynamic Therapy (PDT). More on these modalities later.

Squamous Cell Carcinomas are the “classical” skin tumours, caused primarily by long-term to exposure to UV-B radiation. The animals most afflicted white or part-white cats and dogs. Bull Terriers, Staffies, Pit Bulls, Bulldogs and Jack Russells are amongst the dog breeds most often affected. These “ex-British” breeds enjoy our long, glorious South African summer sun, and “tan” day after day.

UV-B radiation damages DNA and this damage is cumulative and only partially repairable or reversible. Squamous cell carcinomas can look like nothing more than non-healing crusts, pimples or scabs, or they can form large, raised, ulcerating plaques.

It is important to treat according to the stage presented:

T3 = tumour > 5cm diameter, or with invasion of subcutis irrespective of size

T4 = invading fascial, muscle, bone or cartilage, regardless of size

Ulceration of the primary tumour is associated with a biologically more aggressive lesion and a poorer prognosis. It is not known why ulcerated primaries have a more aggressive biologic nature. It is not likely due to underestimation of the thickness due to the ulcer crater. Ulcerated lesions tend to be thicker and have a nodular growth pattern, but the increased thickness does not account for the poorer prognosis. However, the depth or width of surface ulceration has been significantly correlated with survival. Other histologic prognosticators include the mitotic indices, whirling and the presence or absence of lymphatic or blood vessel invasion are relevant to prognosis.

Tumours in situ look like nothing more than scaly, scabby skin and offer another earlier warning sign, the best opportunity for cure, and are a “wake up call”. My preference for this is to use immunotherapy with imiquimod cream, or photodynamic therapy for T in situ and T1 tumours.

T2 tumours which are large but NON invasive (T2 large) also respond well to PDT or radiotherapy, but those that are T2 invasive require surgery or aggressive PDT (only to 5mm depth maximum). Once it gets to T2 invasive or T3+, cure rates using any technique drop to below 40% (from >85%) so teach your pet owners about skin cancer and early aggressive intervention from the first vaccination!

T3 and T1-4N/(any) M0/1 must be referred to a specialist for management. I see huge disasters when GPs approach these with surgery. Dogs are disfigured and then referred when they could have kept penises, mobility or faces with a proper approach from the beginning. An integrated approach using multiple modalities and an understanding of tissue tolerances, treatment sequencing and proper patient surveillance are beyond the scope of general practice. Managing such a patient is often possible, but is an 8 – 20 week process.

More extensive tumours may require additional surgery, chemotherapy or radiation to achieve good results. Their main importance is that they recur because skin of the ventral abdomen, ears or nose have been damaged. (fig 3) Cutting out squamous cell carcinomas can be like the little Dutch boy plugging the hole in the dyke with a finger – another often just pops up elsewhere.

Recurrent SCC may require specialist attention to get under control or cure. In any event, thoracic radiographs should be performed. SCC of the feet (pedal SCC) is far more aggressive and spreads to the lungs earlier than other SCC of the skin, so always attend to any non-healing wound or lump of >1 week’s duration by having it checked using histopathology. 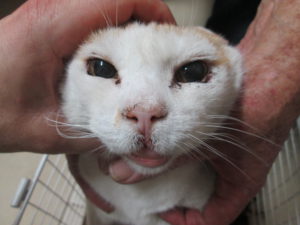 Figure 1. White cat with nasal SCC – this is the earliest stage – the presence of discharge and slight scaling around the nose and eyelids. If treated appropriately at this stage, the prognosis for cure is close to 100% 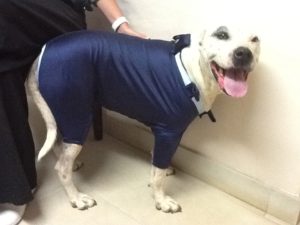 Photodynamic Therapy (PDT) (fig 4) is a technique using the application or injection of photosensitising agents in different concentrations. They accumulate in certain tumours and when subjected to high-fluence (200-300 W/cm2) light of a specific frequency, keyed to the particular molecule being used, the molecules aggregate into unstable complexes that then restabilise by release of various oxygen radicals which cause lipid membrane, protein and DNA damage. Over-treatment causes regional vasoconstriction and side effects, without increase in toxicity; undertreatment achieves little, but aggravates the inflammation. This treatment is effective only in lesions <5mm thick. Treatment is once a monthly, for 1 – 3 treatments, depending on severity and extent. Pre-cancerous actinic keratosis can also be successfully managed using this technique.

Immunotherapy using Imiquimod (Aldara; 3M), animidazoquinolinamine, is an immune system modulator and possesses both potent antiviral and antitumor activity in animal models and humans. Current theories suggest that imiquimod acts both directly by inducing apoptosis and by inducing secretion of pro-inflammatory cytokines. Imiquimod activates macrophages and other cells via binding to cell surface receptors, such as Toll receptor 7, and thereby induces secretion of pro-inflammatory cytokines such as interferon-a (IFN-a), tumour necrosis factor-a (TNF-a), and interleukin-12 (IL- 12). These cytokines bias towards a Th1-dominant immune response, which in general is associated with inflammation and tissue injury through activated inflammatory leukocytes and with cytolytic activity through CD8+-lymphocytes (Abbas et al 1996). Imiquimod can also induce apoptosis directly in a Bcl- 2-family-dependent manner by downregulating anti-apoptotic genes such as hurpin and HAX-1.

Treatment is applied to lesions Monday to Friday, once daily, for 6 – 12 weeks; inflammation caused by the treatment can occasionally be severe and require NSAIDs.

I reserve this for small/early/superficial lesions in cats due to the cost of the cream. Clients must wear gloves to protect themselves. Efficacy is reported as about 75%, with a median survival time of 1189 days, although recurrent lesions do seem to respond to the therapy.

5-Fluorouracil use in animals: this drug is rapidly and fatally neurotoxic in cats even as eye drops. In dogs, the tolerance is also very low and if licked it can trigger fatal mucosal sloughing. Don’t use in veterinary practice.

CRYOTHERAPY is outdated, painful, disfiguring and has a lower success rate than other therapies mentioned. Do not use this. Poor technique is a major reason for treatment failure; it requires training and experience and is potentially hazardous to the operator.

RADIATION THERAPY: the use of a linear accelerator to deliver high-voltage (4 – 20 MeV) electrons or photons for the treatment of surface tumours is called teletherapy. This technique has the potential for extreme harm if improperly performed, and all such cases are specialist cases and must be referred to a person with the relevant training. There’s a reason it’s an entire field of speciality in itself in the US and Europe. It requires a knowledge of radiation physics, radiation biology and management of radiation side effects that cannot be gleaned from a few lectures.

The role of surgery in managing skin tumours.

Surgery is an important part of management of these conditions. For some tumours e.g. BCC, HA/HSA, MCT, a properly-performed excision can be curative. In others, e.g. SCC, the surrounding skin is often also on an “anaplastic march” that is unstoppable by surgery alone. Surgery then helps debulk larger masses that would not respond as well to wider-field but lower-intensity therapies e.g. imiquimod, PDT, RT. The timing and planning is critical. Discuss this with a specialist BEFORE radiation or PDT PLEASE! Post-surgical fibrosis decreases the efficacy of other modalities! (fig 5) 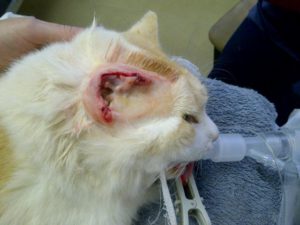 Figure 3. SCC ear pinna removal – This is the degree of sur­gery required for more advanced SCC of the pinna, and is to be avoided if possible, by appropriate education of the client at first vaccination of the kitten. This sort of cat may be allowed out at night, but not during the daytime. 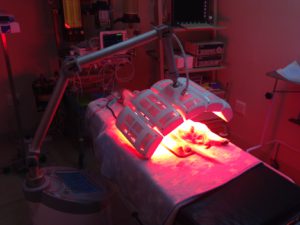 Basal cell tumours are a benign tumour that look very similar to SCC, and are quite common in cats in other parts of the world. In dogs, they typically occur around the head and are not unlike canine cutaneous histiocytoma (hence the need for a tissue diagnosis). They are usually single, raised, ulcerated “button-like” tumours. Surgery alone is normally curative. They can be diagnosed by cytology or histopathology. BCC and SCC are classed together as the “Keratinocytic Skin Cancers”. 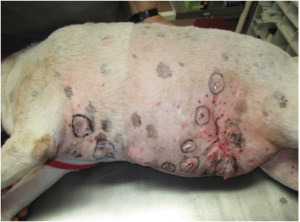 Figure 5. Multiple raised SCC on the ventrum of a dog; the previous sur­geries have contributed to scar tissue formation, which makes radiation less effective, and future surgeries more difficult. The widespread nature of the disease means a novel approach must be taken if control is to be achieved. Patients arriving at this stage are major challenges to cure.