All over the world, dairies experience an increase in somatic cell count (SCC) during summer and autumn. The extent to which climatological factors contribute to this increase in South Africa is unknown, although the weather is blamed anecdotally. Consequently, the value of heat abatement or other preventative intervention cannot be established. The relative effect of season and/or heat stress on milk production and SCC is likely to be unique to South African conditions

This study had three main objectives:

The investigation included individual milk recording data for almost 60 000 cows from January 2013 to July 2015. Using current and previous SCC recordings, cows with an  SCC>200 x 103 cells/ml were classified as high (H), and cows with an SCC≤ 200 x 103 cells/ml as  low (L). Transitional categories (TC) were defined by the change in udder health status from one milk-recording test to another, and included healthy cows (cows with two consecutive low recordings, or LL), recovering cows (cows that had transitioned from a high to a low SCC, or HL), new infections (cows that had transitioned from a low to a high SCC, or LH), and chronically infected cows (cows with two consecutive high recordings, or HH).Four production regions were defined: Central, Eastern Cape (EC), KwaZulu-Natal (KZN), and Western Cape (WC). Weather data were obtained from the South African National Weather Service (WeatherSA), including monthly averages of maximum and minimum temperature (°C), pressure (kilopascal or kPa), relative humidity (%), and rainfall (mm). The temperature humidity index (THI) was calculated, combining temperature, humidity, and pressure into an outcome parameter, and was applied in four categories: <65, 65―69, 70―74 and >75+. The total contribution of each transitional category to the bulk milk SCC was calculated, and the increase in SCC between winter/summer and low/high THI conditions determined.RESULTSThe wide range in distribution of HH and LL cows on various farms would explain why some farms experience unacceptable increases in SCC in summer, with a resultant loss in premiums and/or incurring of penalties.

Data suggest that more than 70% of the increase in bulk milk SCC, secondarily to an increase in THI, was due to the cows in the HH category. This suggests that a summer increase in bulk milk SCC is not due to a mild or moderate increase in the SCC of many cows in a herd, but rather to a moderate to marked increase in the SCC of cows in the HH category, those suffering from chronic mastitis. Herds with a higher proportion of cows with chronic mastitis will be most affected during periods of high THI, mostly due to decreased immunity, increased environmental bacterial load, and suboptimal management practices. The proportion of HH cows on a farm is a function of general udder health and this is the first aspect that needs to be addressed if a farmer experiences an unacceptable summer increase in SCC. 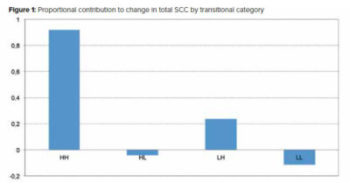 Results of this study suggest that, compared to the central region of South Africa, and with all other factors being equal, producers in the WC, KZN, and EC have an increasingly smaller risk of producing high SCCs during the winter to summer period. This might be a reflection of the more favourable environmental conditions for dairy cows that prevail in these main milk-producing regions of South Africa. Cows with healthy udders (LL) are less sensitive to higher THI levels, whereas cows with chronic mastitis (HH) tend to show a marked increase in SCC, which is why these cows should be the focus when addressing a summer rise in bulk milk SCC. Identifying cows with chronic mastitis and finding the reasons for their elevated SCC is the first step in devising a strategy to minimise the seasonal rise in bulk milk