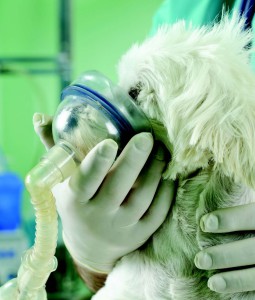 In the last decade pulmonary hypertension (PH) has become well recognised in veterinary patients, but remains an elusive condition that is infrequently diagnosed. Despite many (human) advances in the research of PH, there still remain many mechanisms of this multifactorial condition that are poorly understood.

The definition of PH is a mean pulmonary artery pressure (PAp) that exceeds 25mmHg when resting. This elevated pressure is the result of increased pulmonary vascular resistance, and leads to compensatory changes to the right side of the heart, right heart side dysfunction and ultimately failure.

There are now many groups and sub-groups in the classification of PH; in veterinary medicine it may usefully be limited to 4 main groups.

This is probably the most frequently encountered group in veterinary medicine. Sustained elevated left atrial pressure with backward pressure into the pulmonary veins eventually leads to a cascade of deleterious vascular changes. The condition is reversible in its early (passive) stages, but local activation of agents such as endothelin and angiotensin, together with hypoxia leads to irreversible (reactive) thickening of the alveolar-capillary membrane which impedes gas transfer. Hypertrophy and thickening of the vessels is characterised by collagen deposition and causes increased pulmonary vascular resistance.

This group is also well represented in veterinary medicine with conditions including chronic bronchitis, chronic obstructive airway disease, collapsed trachea, laryngeal paralysis and brachycephalic syndrome. Hypoxia is a powerful vasoconstrictor, which together with vascular proliferative changes and variable fibrosis and inflammation leads to increased vascular resistance.

Diligent cardiac auscultation may detect a loud and `split` second heart sound (S2). This is because the pulmonic valve closure is delayed beyond the aortic valve closure, and requires more energy in the face of increased pulmonary pressure. 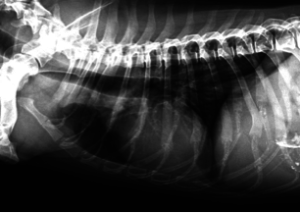 Radiographic changes include right-side heart cardiomegaly, and variable pulmonary changes (Figure 1). In the case of PVH there will also be left side enlargement.

Haematology may reveal an elevated haematocrit in response to sustained hypoxia. This increases the risk of developing thrombi in the small pulmonary arteries; due to both increased viscosity and altered endothelial function.

ECG changes are non-specific, expected findings include a right shift in the electrical axis, and tall P waves (P.pulmonale). Arrhythmias may originate from the atria or ventricles.

Echocardiography can often provide concurring evidence with an enlarged right atrium, an enlarged hypertrophied right ventricle with `flattening` of the interventricular septum and possibly paradoxical septal movement. A dilated pulmonary artery may also be visualised.

The tricuspid regurgitant flow may be the result of responsive changes to PH that include ventricular hypertrophy, altered geometry of the right ventricle with dilation of the valve annulus, and/or endocardiosis.

There are often multiple contributing factors to the development of PH e.g. an older brachycephalic dog with advanced mitral valve disease that develops chronic bronchitis. Diagnosis requires a high index of suspicion together with a careful appraisal of all clinical and investigative findings.

There is no single curative therapy for PH; treatment is aimed at reducing dyspnoea and coughing, improving exercise tolerance, and overall quality of life. Identifying likely causes and targeting these should be the priority; this will involve agents that improve ventilation, reduce volume overloads, assist failing ventricles and decrease PAp.

There is an inexhaustible list of medications used to treat PH in both human and veterinary patients; some of the more available and applicable veterinary ones are listed below.

Clinicians presented with a dog (or cat) that shows e.g. exercise intolerance, coughing, murmurs, dyspnoea and inspiratory crackles – but that only shows a negligible or moderate response to standard congestive heart failure therapy should be aware of the possibility of PH.