More recently the term clinical endometritis has been substituted with the descriptive term ‘purulent vaginal discharge’ (PVD) in order to acknowledge the potential for a purulent discharge to originate from regions of the reproductive tract other than that of the endometrium, such as the cervix [1]. There is a wide variation in reported prevalence of endometritis in dairy herds ranging from 5 to 68% and this is suspected to be due to inconsistencies in the timing of examination postpartum as well as varying diagnostic criteria [2] however it is likely that a more realistic prevalence of clinical endometritis is in the region of 15% and that of cytological endometritis being a further 15% [1].

The causes of endometritis are multifactorial and extensive. In the last 2 weeks of pregnancy and the first 3 weeks postpartum, the immune function of the dairy cow is suppressed. Immediately post calving there is bacterial contamination of the uterus which normally persists for 2 to 3 weeks.

This is an inevitable and natural occurrence as the cervix dilates and the vestibule and vagina relaxes, resulting in the natural barriers and bacterial defences being temporarily impaired [3]. During this time there are many other contributing factors which further compromise the ability of the dairy cow to effectively clean the uterine environment. The negative energy balance these cows enter in to, due to reduced appetite together with an immediately elevated production requirements as they begin lactation, which in the modern dairy cow is a significant metabolic strain [1]. As a result of these factors it is a common finding that cows begin to mobilise body reserves to support their genetic predilection for milk production. The result is elevated non-esterified fatty acids (NEFA), beta-hydroxybutyric acid (BHBA), bilirubin and urea. Increased circulating NEFA contributes to the risk of fatty liver and ketosis, this is in turn associated with an impaired PMN function, in particular neutrophils [1].

The uterine immune defence have been investigated and has shown toll-like receptor 4 (TLR4) which binds the endotoxin lipopolysaccharide (LPS) playing a key role in the uterine inflammatory cascade. Within other species it has been shown that fatty acids may bind to TLR4 and induce a pro-inflammatory cascade, indicating an important link between lipid metabolism and innate immune function [1].

Immediately post calving, the influx of PMNs and in particular neutrophils plays an important role in the detachment of the placenta and clearance of bacteria and lochia. There is evidence however that an excessive inflammatory response in the first and second week postpartum is associated with a higher incidence of endometritis.

Clinical endometritis is diagnosed based on history of a cow, at least 21 days postpartum with a mucopurulent to purulent vaginal discharge. If a vaginal speculum is passed, the discharge can be confirmed to originate from the cervix or uterus. Unless there are other complicating factors such as metabolic disease occurring simultaneously, the animal is not systemically affected. Subclinical or cytological endometritis has no external clinical findings. 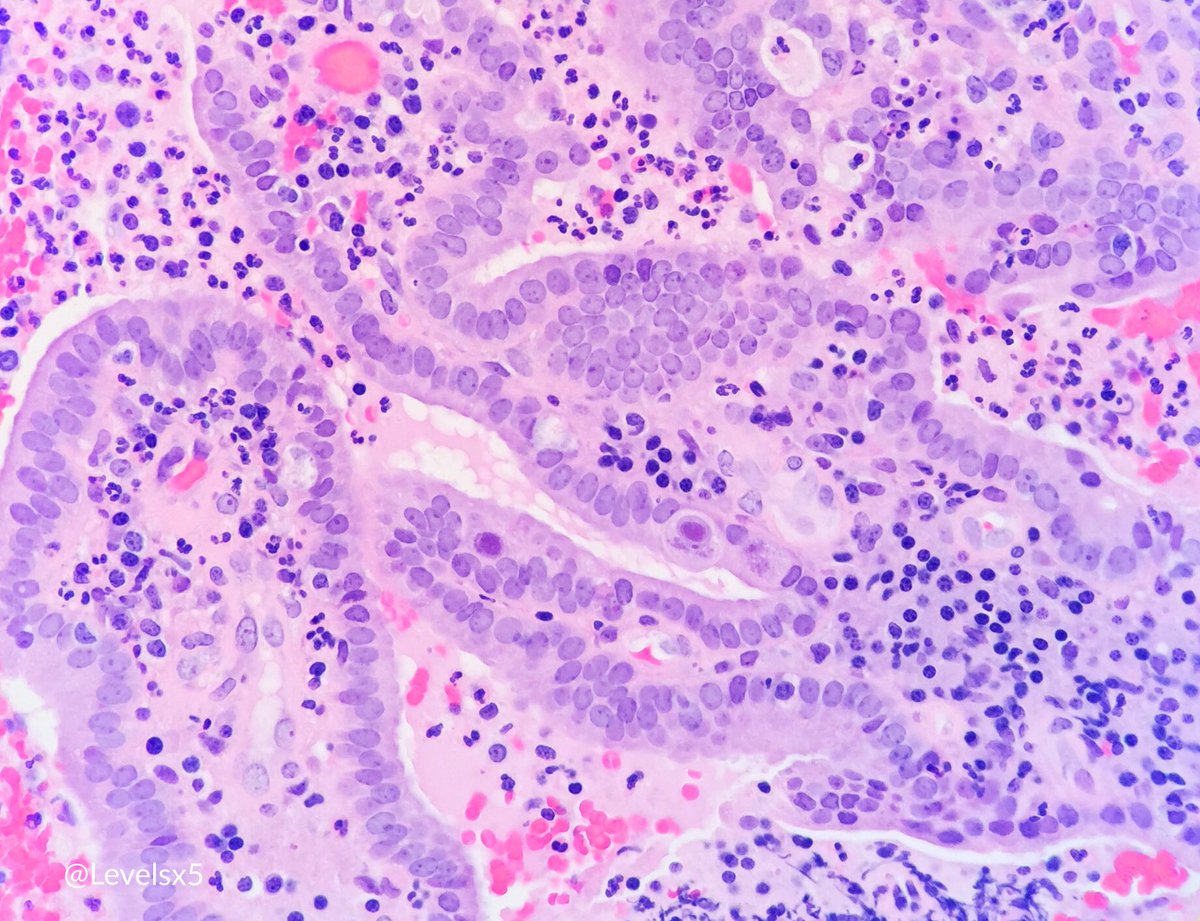 It has been shown that there is a strong association between endometritis, both clinical and cytological with a reduction in reproductive performance [1]. Histologically the endometrial endothelium is disrupted with infiltration of leukocytes and vascular congestion and oedema [3]. Studies have shown that cows with endometritis have an increase of 15 days open on the mean.

It has also been shown to decrease the risk of pregnancy by 150days in milk by 31% and reduces pregnancy rate by 16% [3]. In the case of cytological endometritis it was interestingly shown that cows with no neutrophils on uterine cytology were just as likely as those with high (>15%) neutrophils of not being pregnant when compared to cows with 1-15% neutrophils indicating the importance of a well-managed immune system [1]

There are also ‘white side tests’ which entails collecting mucous from cows suspected of endometritis and heating it with a sodium hydroxide solution up to boiling point. If the reaction turns yellow it is positive for endometritis/metritis due to the presence of leukocytes. Uterine biopsy is invasive and is excessive for the diagnosis of endometritis however cytology using a cytology brush can be achieved, especially when herd prevalence is high and further investigation into causative organisms is required.

A large proportion of cows with endometritis self-cure with no treatment at all. Percentages change dependent on the study but it is in the region of 60- 75%. This is due to the natural processes of healing of the uterine endometrium post calving [6]. Due to the financial impact of delayed and reduced reproductive performance however, there is considerable pressure to identify and resolve these cases as soon as possible.

Treatment options that have been investigated include the use of intra uterine flushes, antibiotics and prostaglandins with varying amounts of success. Dilute uterine flushes of Lugol’s iodine have been shown to reduce the degree of contamination of the uterus and have shown promising results in hastening the cure rate. Antibiotic use can be employed to reduce the incidence of clinical endometritis but very few antibiotics have actually been shown to work effectively in the uterine environment.

Administration of systemic antibiotics is controversial in the absence of systemic signs and should be avoided. Parenteral ceftiofur for 3 days has been shown to be equivalent to PGF in decreasing the time to conception [7]. Intrauterine use of tetracycline, penicillin, chloramphenicol, gentamycin, sulphonamides, nitofurazone and chlorhexidine have all been described however none of them have general efficacy data available for them.

Prostaglandin (PGF2α) is an endogenously secreted hormone that causes luteolysis of the corpus luteum (CL) and return to oestrous. During oestrous the hormone of dominance is oestrogen which stimulates uterine contractility and clearance of its contents. During oestrous the uterine environment is primed to combat inflammation by triggering an influx of neutrophils and immunoglobulin into the uterine mucosa and mucous.

There is an increase in leukotriene B secretion by the uterus which supports chemotaxis, cell mediated cytotoxicity, phagocytosis and lymphocyte function and it is by these mechanisms that the uterus is able to self-cure in the majority of instances [6]. The use of exogenous PGF2α allows for this process to be initiated on diagnosis and by doing so perpetuate a faster cure rate.

Clearly for PGF2α to be effective a functional CL needs to be present (CL older than 5 days). The most common protocol is the use of 2 prostaglandin injections 10-14 days apart and the meta-analysis has shown it has the same cure rate as parenteral ceftiofur and treated cows had significantly less days open than untreated cows [6].

Prevention of endometritis is based around the promotion and support of the innate immune system. Management of nutrition in the early post calving period is critical to minimizing the negative energy balance and circulating NEFA concentration that inhibits PMN function. Proposed management practices include provision of bunk space for ease of feed consumption, provision of suitable; clean rest area so that fresh in milk cows can lie without excessive contamination of the reproductive tract. Regulate temperature so cows are comfortable and manage monitor methods and targets so that problems can be identified and managed early

Management of risk factors will also decrease the prevalence of endometritis such as retained placenta and all its underlying factors as well as the early resolution of dystocias and twinning [1].

The prognosis for cure of endometritis is high however the implications of endometritis does not lie in mortality or morbidity but in the decreased reproductive performance which results in cows being open for longer, increased cost per litre of milk produced and decreased profits for the farming enterprise.

While there is a high degree of self-cure, early diagnosis of endometritis and proficient treatment results in an increased risk of pregnancy when compared to animals that are untreated and therefore justifies the cost of treatment.