Production diseases are also known as metabolic diseases, which is a bit of a misnomer.  In human and small animal medicine the term metabolic disease implies some inherent defect in the metabolic processes of a patient like a deficiency in a vital enzyme.  This may lead to failure of a metabolic pathway and the accumulation of certain metabolites.

High producing animals produce so much that no naturally occurring diet can maintain a positive nutritional balance.  This situation was brought about by the ongoing selection for higher production, together with the relative neglect of the improvement of management practices to sustain such high production.

Production diseases are most important amongst lactating dairy cows and pregnant ewes.  The reason in lactating dairy cows is that they will continue to produce milk even when their body reserves are depleted, because they have been genetically selected to do so over many generations, by physiologically separating the control of milk production from the control of homeostasis.  Ewes on the other hand, become affected during late gestation when the source of increased output, the fast growing foetus(-es), can not be ‘removed’ to correct the imbalance.

From the following table, it is clear that the reason why certain metabolites are more likely to lead to production diseases, is that the available reserve pool of these metabolites is small relative to the throughput.  Take for instance Calcium, where the throughput can be up to 10 times the amount of the available (serum) reserve.  This leads to a very finely ‘tuned’ homeostasis that can be disturbed easily.

The dry period should be regarded as a preparatory period and as an investment for optimal health and performance in the subsequent lactation.  Stress should be minimised as this has been recognised as a common risk factor for many production diseases. The rumen must be adapted gradually to the higher energy diet that will be fed in early lactation.  Normal serum calcium levels must be maintained to reduce the risk of diseases associated with clinical and sub-clinical hypocalcaemia.  The maintenance of a strong immune system and a positive energy balance up to the time of calving is critical.  The close–up diet should be formulated as accurately as possible to provide the required nutrients and have an appropriate balance between anions and cations.

Production vs Health and Reproduction

Over the last approximately 50 years, genetic selection has led to markedly increased milk production ability of dairy cows. At the same time, despite advancements in technology and knowledge to prevent production diseases, the incidence of these diseases has stayed more or less unchanged. The same applies for reproduction parameters, except in the case of reproduction the situation has deteriorated and not just stayed the same. There is now some physiological evidence that the mismatch between milk production ability (genetic) and management (including nutrition) leads to deterioration in oocyte quality and embryo survival. In other words, reproduction (or production diseases for that matter) acts as a barometer for the mismatch between advances in genetics for production, and improvement in management practices to sustain such high production in the cows. The following diagramme illustrates this principle: 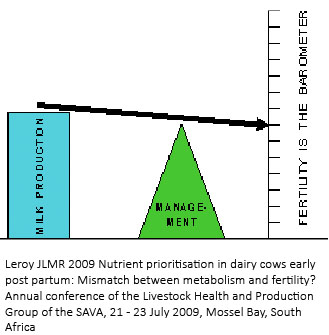 It is important to consider production diseases on a herd basis, in order to predict occurrence and set up preventative measures.  This can be a very challenging, but also extremely rewarding task to the practising veterinarian.