A murmur is an audible sound produced by vibrations of cardiovascular structures as a result of disturbed or turbulent blood flow replacing normal laminar flow. 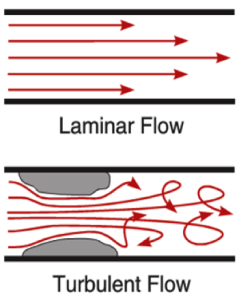 There is a critical velocity at which laminar flow becomes turbulent, it is expressed by Reynold`s number and is dependent on the velocity of the blood, viscocity and the vessel diameter (fig. 1).

Diagnosis needs good auscultatory skills that require patience, time and practice. A quality stethoscope and a quiet environment are vital.

Murmurs may be masked by obesity, pleural and pericardial effusions, and respiratory sounds. Synchronous breathing (what it this – ?) maybe explain ? and panting may be mistaken for murmurs.

Murmurs are described by their point of maximum intensity (PMI) noting the location, intercostal space, and valve over which the murmur is loudest; intensity on a 1/6 to 6/6 scale; radiation over the thorax and neck; timing within the cardiac cycle – systolic, diastolic or continuous; and quality such as “soft”, “musical” or “harsh”.

Further descriptive terms include the timing within the systole or diastole e.g. early or late systole. The fast heart rates of dogs and cats usually make this difficult without phonocardiography. 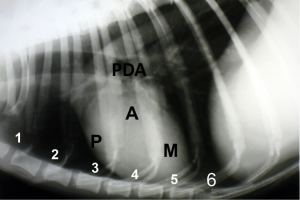 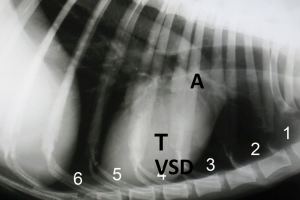 Grade 1 is very soft and localized, and is initially inaudible.

Grade 2 is soft, but heard immediately and is localized.

Grade 3 is soft and radiates to more than one location.

Grade 4 is moderate-intensity to loud that radiates, but has no precordial thrill (a palpable `buzzing` sensation on the hand)

Grade 5 is loud and accompanied by a precordial thrill.

Grade 6 is loud with a precordial thrill and is still audible when the stethoscope is lifted off the chest wall.

As a rule low grade murmurs (< 2/6) are mild and probably not haemodynamically important. There are exceptions to this, notably a ventral septal defect (VSD) – see below.

These murmurs have normal valves, with no cardiac disease and are known as physiological, functional or flow murmurs, examples include exercise, fever, hypotension and hyperthyroidism. Anaemia also produces increased flow velocity with audible murmurs (haemic) when the haematocrit is less than 25% in dogs and 20% in cats; conversely, polcythaemia may mask a murmur.

Young animals often present with low grade (< 3/6) soft systolic ”innocent” flow murmurs that usually disappear by 6 months of age. Lower haematocrit and faster heart rates are involved. They are often intermittent, even during the course of auscultation.

Bradycardias result in increased stroke volume, as will an `athletic` heart. These murmurs are usually soft, early systolic and <3/6.

Certain breeds, notably boxers, are often ascribed as having a normal but relatively narrow aortic outflow tract which results in increased velocity. These murmurs are often more readily detectable in the thoracic inlet area.

Ventricular outflow obstruction (ejection) murmurs are systolic, harsh, and described as having a crescendo-decrescendo configuration with a PMI in the heart base area. Causes include pulmonic stenosis, sub-aortic stenosis and bacterial endocarditis.

Regurgitant murmurs from abnormal (dysplastic) mitral and tricuspid valves are systolic with PMIs over the relative valve area, and described as having a plateau configuration.

Specific murmurs due to congenital defects

A knowledge of breed predispositions for both congenital and acquired conditions, the age of the animal, sex, and murmur description will often lead to a presumptive diagnosis. Radiography will help confirm many cases, but definitive diagnosis requires echocardiography and Doppler studies.

This outflow murmur may be detected with an equal or even greater intensity on the right heart base area, (figs. 2, 3) but unlike the murmur of PS, it will frequently radiate up the carotid arteries, and is occasionally audible on the cranium. A precordial palpable thrill is usually detected.

It is more common in larger breeds, and is a defect that continues to develop over the first few months of life, even up to 12 months, consequently it may be low grade when first detected, and then develop over several months. (fig.4) 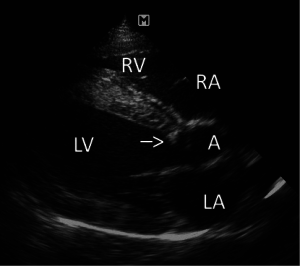 It is occasionally encountered in cats

This is more common in smaller breed dogs, and English Bulldogs. It is best heard high in the left heart base area (fig. 2) and if severe maybe accompanied by a palpable thrill. Unlike the murmur of SAS it does not usually radiate widely, and may be accompanied by jugular vein pulses.

This is one of the most frequent cardiac defect encountered in cats, it is less common in dogs. The murmur is loudest along the right sternal border (fig. 2). A very large shunt volume will result in a functional flow murmur across the pulmonic valve and a left heart base ejection murmur.

They are most common in the larger dog breeds, and are not uncommon in cats. Auscultatory findings are similar to endocardiosis (see below) with PMIs over the affected valve area (figs. 2,3).

The murmur is loudest high in the left heart base (fig. 2), and is easily overlooked if the stethoscope is not correctly placed. A palpable thrill is often detected. The murmur is described as `continuous`, but will wax and wane with its peak at the end of systole and early diastole. It frequently radiates widely over the left and right heart base areas.

In cats the PMI is typically more caudoventral, and the diastolic component is often more difficult to detect.

Myxomatous degeneration of the mitral valve (endocardiosis) accounts for most murmurs encountered in middle-age and older small breed dogs. Approximately 30% will have accompanying tricuspid valve involvement. It is unusual for the tricuspid valve to be solely affected. Occasionally a loud (4/6) murmur with a high frequency is heard and is described as having a whooping, musical or seagull character; this murmur can be alarming but usually represents a small orifice with a high velocity regurgitant jet and a minimal volume overload response; high frequency vibrations of the chordae tendinae are involved in the generation of this murmur.

Dogs with dilated cardiomyopathy will often present with a soft low-grade murmur over the mitral valve area due to stretching and distortion of the valve annulus.

Infectious endocarditis is recognized in both dogs and cats, mostly involving the aortic valve, mitral valve or both, with large breed male dogs more affected. A high index of suspicion is required for diagnoses, the murmur will be recent and often changes in character and even position over a short period of time. PMIs will be over the affected valve(s). Predisposing factors include pre-existing endocardiosis and congenital defects including SAS and MD.

Cats frequently present with murmurs, it is sometimes quoted that 30% of all cats presented to clinics will have a detectable murmur. In a recent investigation of 57 apparently healthy cats with murmurs, cardiac pathology was found in over 80%. (1) Atrioventricular valve dysplasia, aortic stenosis, and VSD are common congenital defects encountered.

Unlike dogs, the PMI of many murmurs is along the right and left sternal area due to the sternum acting as an acoustic enhancer

Cats frequently present with an ejection murmur that is `dynamic` in nature i.e. it increases with the heart rate and is due to certain forms of hypertrophic cardiomyopathy (HCM) called hypertrophic obstructive cardiomyopathy (HOCM) and also systolic anterior motion (SAM) of the mitral septal leaflet that leads to both aortic outflow stenosis and mitral valve regurgitation (fig. 5).

Dynamic obstruction to the right outflow tract is often encountered in the older cat.

These dynamic murmurs do require an index of suspicion necessitating a protracted period of auscultation waiting for the cat to relax upon which the murmur may disappear completely, it is then confirmed by gentle stimulation/stress such as shaking the cat or opening a door and the faster heart rate will cause the murmur to reappear.

Iatrogenic murmurs are readily produced in cats by applying excessive pressure to the stethoscope.

Diastolic murmurs are unusual, more difficult to identify, always pathological, and beyond the scope of this brief description of murmurs.