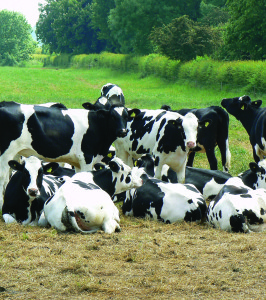 Through serological surveillance the prevalence of IBR and BVD viruses in South Africa (resource poor farmers in Gauteng) was shown to be 75.9 % and 49.4 % respectively (Nijro S. et al 2011). This relatively high prevalence rate can be contributed to the poor control of the contagious diseases over the past few years, due to factors like the indiscriminate movement of stock between herds and a deficit in maintaining the four pillars of disease control (Biosecurity, Surveillance, Resistance/immunity and control in the herd).

The four pillars can be further broken down into the following critical control points: Welfare, Herd health and economical management. Each point aids in assessing the disease risk and should actually determine the control strategy of the diseases, hence influencing the choice of vaccination, etc. instead of only using the retrospective prevalence to determine the management of diseases like BVD and IBR. This is central to protect naïve herds and animals, limiting the ambulance approach of veterinary care. (Orpin P.G, Sibley R.J 2014)

The principals of BVD and IBR control should be to effectively identify problem areas and animals and remove the risk factors potentiating the problem. By monitoring the critical control points based on the scale of: present and satisfactory, present and poor or absent. One can prioritise additional management operations to enhance the effect of vaccination (immunity development).

Often simple steps can make some of the biggest differences. The basics involve maintaining good animal welfare by optimising the running (economical management) and developing of the housing facilities (e.g. good and frequent hygiene practices to limit disease spread within groups and between groups, allow for suitable ventilation (15m3 per calf ) to reduce overheating and stressing the respiratory tract (dust and ammonia), selecting the population density according to the facility’s limitations and having a homogeneity in age, size and gender within each group).

Then there are other points on managing the handling and processing of the animals before, during and after arrival [e.g. Biosecurity, vaccination, dehorning, early identification of sick animals and treatment (therapeutics (mass treatment) and prophylactics)]. The processing of an animal is often based on convenience and labour availability.

The correct balance between all of the above factors will impact the morbidity % (fever, respiratory signs, anorexia and depression) and Mortality % (Bovine Respiratory Complex = 70%) rates in these animals. This is particularly relevant in feedlots as there is about a 2.5 x greater cost per case (40% due to loss in ADG, 31% due to medicines, 14 % due to mortality, 10% due to veterinary costs and an additional 5% unclassified costs) when compared to dairy calves (Andrew 2000).

All of the above factors are important as the immunity of these animals are lower due to the elevated stress, allowing for the transmission of viruses and bacteria further increasing the pathogen loads within the population of animals, thus causing economical losses.

The herd health aspect introduces the concept of identifying the Persistently Infected (PI) calves and animals that are carriers of IBR (latent in the trigeminal nerve). This is because 43% of animals in contact with a PI calf are likely to become infected. The biosecurity management of the farm is important in limiting the introduction of BVD and IBR into the farm and herd.

This is important because this type of animal has an erosive effect on a herd especially during stressful stages in the production cycle (weaning, processing, traveling and regrouping), resulting in pneumonia and reproductive failure (Early Embryonic loss, Late Embryonic loss and abortions) that can cause a noticeable drop in the following production parameters ADG (Average Daily Gain), FCR (Feed conversion Ratio) and extra costs of drugs (antibiotics and NSAIDs).

In the case of BVD the best method is PCR evaluation of tissue and paired antigen testing of blood serum (2 to 3 weeks apart). Similarly BVD can be monitored in herds based on ELISA (Blood serum and milk) or PCR (nasal swabs). The ELISA tests available are unable to differentiate between field and live vaccine strains regarding BVD and IBR, thus posing a problem in herds were a live vaccine is used.

The blood/serum samples are therefore collected from a representative group of animals that would best depict the farms’s epidemiological situation. Therefore 8 to 10% of the group of animals will be sampled and tested, based on herd size and vaccine type used e.g. live vaccine – only unvaccinated animals would be sampled; non-vaccinated or inactivated vaccine – a proportion of calves, heifers and cows would be sampled. In this way you will see the circulation of the viruses on the farm and this also illustrates the importance of a mass vaccination scheme to limit the pocket formation of susceptible animals.

This is important because the BRSV is a bigger problem than previously thought and was under diagnosed. The samples are collected from animals that are in the early stages of infection (7 to 10 days prior to clinical signs) within a group of animals showing clear clinical signs of disease (depression, fever, coughing, lacrimal and mucopurulent nasal discharge).

The BOVIRESP® kit has four swabs and four FTA cards, with one large sponge swab and FTA card per animal. The swab is inserted into both nostrils to collect squamous cells and mucus, which in turn is placed on an FTA card that is evaluated by PCR.

Understanding the different elements of the diseases one can better prevent the spread and immunosuppressive effects of the viruses. The pathogenesis of BVD, and IBR (primary agents in the respiratory disease complex) effects the respiratory and reproductive tracts.

These particles and mucus are then swept by the cilia to the oropharynx and removed. This is then further strengthened by the humoral and cellular immunity of the body (questionable effect in unvaccinated animals).

However these defence mechanisms are overridden by the immune suppressive properties of BVD (Macrophage function and lymphocyte responses are decreased and chemotaxis of monocytes are impaired) and IBR (viruses and result in the onset of the secondary bacterial infections). (Fig. 2 and 3)

The diagnostics and monitoring of the diseases are further supported by the macro and microscopic pathology seen in the respiratory (bronchiectasia, interstitial emphysema, haemorrhaging, necrosis, abscesses and hepatisation of lung tissue), digestive and reproductive systems during a necropsy.

The lungs show typical signs like a cranioventral fibropleuropneumonia that often results into a Chronic suppurative bronchiopneumonia.  (Figures 5 and 6)

By using the data collected from management evaluation, diagnostic tools and necropsies, one has completed to a certain degree the surveillance of an infectious disease and from this one will improve the biosecurity aspects of a farm/herd, by testing animals before entry and separating sick animals into hospital/quarantine areas.

This then brings up the question of how the famer can provide the best control and immunisation against BVD and IBR. The control is twofold, firstly prevention and secondly treatment (metaphylactic).

The prevention in most cases is strongly based on vaccination at strategic times to limit the risk of disease occurrence and spread. There are live vaccines and inactivated vaccines, each with their positive and negative characteristics. The live vaccines are thought to have better immune stimulation, but the negative effects could potentially outweigh the positives as the live viruses often revert back to virulent strains causing the exact disease they were supposed to eliminate and depending on when administered will result in abortions, PI calves, drop in milk yields and ovarian lesions.

The inactivated vaccines are more useful as they are effective in priming the immune system with the additional benefits of safety (no reverting of the vaccine viruses to the virulent strains causing abortion, no negative reproductive influence due to lesions on the ovaries and suppressed oestrus cycles, significant foetal protection and decreases the chances of PI calves by 80%).”.

The inactivated vaccines are also more versatile as one can vaccinate animals as a mass vaccination programme, thus preventing pocket formation of animals that could harbour the diseases.

The mass vaccination programme of HIPRABOVIS®4 addresses the pneumonia occurring in calves from 4 weeks of age by boosting the immune system when the maternal immunity starts to wane, while at the same time limiting respiratory and reproductive symptoms in heifers and cows.

The heifers would receive two vaccinations one month prior to breeding and the adult cows can receive a vaccination at any stage of production (pregnant, lactating and dry). Plus you can get the benefit of vaccinating prior to calving to further boost the colostrum antigens. (Fig. 7) 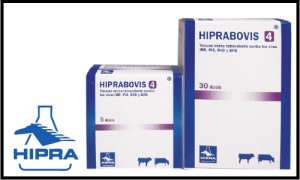