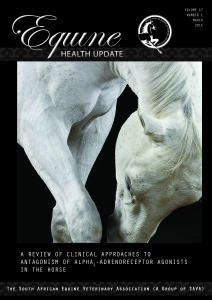 Time is flying and May is around the corner.  It feels like yesterday when we hit January 1st.  Seems the older I get the quicker time goes by as well.  I hope the people that attended the annual congress in Stellenbosch enjoyed it thoroughly as well as some red wine too!

You will find in this issue an article on post-operative ileus, something I think we all struggle with, as well as an article from Gareth Zeiler, a very competent anaesthetist from OP that was published in the same issue of the EVE.  Enjoy.

“Always do right!  This will gratify some people and astonish the rest” Mark Twain

Alpha2-adrenoceptor agonists xylazine, romifidine, detomidine and, in some cases, medetomidine and dexmedetomidine, are fundamental drugs used in equine practice. There are situations where the undesirable pharmacodynamic effects (ataxia, prolonged sedation, bradycardia and ileus) or accidental overdose of these drugs may need to be antagonised. The α2-adrenoceptor antagonists tolazoline, yohimbine and atipamezole can be used to antagonise undesirable effects.

However, despite being effective, α2-adrenoceptor antagonists are also not without undesirable pharmacodynamic effects. Excitement, muscle trembling and triggered inappropriate stress responses are a few of the more serious undesirable effects. Horses demonstrate a variable response to the antagonists thus recommending dose rates become fraught with difficulty. It is therefore recommended that the α2-adrenoceptor antagonist should be titrated to the desired clinical effect. Consequently, other reversal agents, such as anticholinergics (atropine, glycopyrrolate and hyoscine), have been administered for the treatment of α2-adrenoceptor agonist-induced bradycardia.

Not a member?   Click here to Join the South African Equine Veterinary Association (A Group of SAVA)