Basically, 4 approaches are used in the prevention of specific diseases. These approaches can be used as a single approach but in most cases a combination of two or more approaches is used to reduce the risk of disease.

These approaches will now be discussed in the context of disease resistance on a herd health basis. 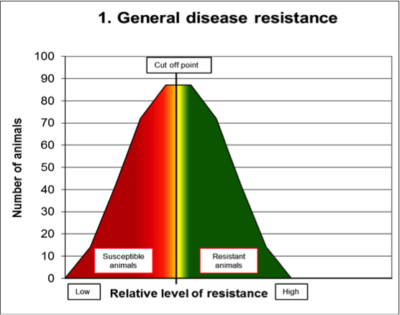 Within a dairy cattle population, there will be different levels of resistance to a specific disease between animals, even if the animals have not been exposed to the disease before.

A few animals have no or little resistance (left hand side of the curve).

Most of the animals have an average level of resistance (middle part of the graph).

A few animals have very good resistance (right hand side of the curve).

In the middle of this graph is a line that depicts the cut-off point which is the minimum resistance needed to prevent the animal from becoming sick. 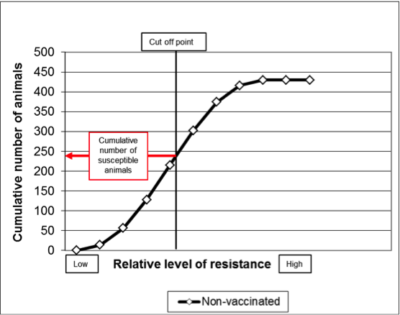 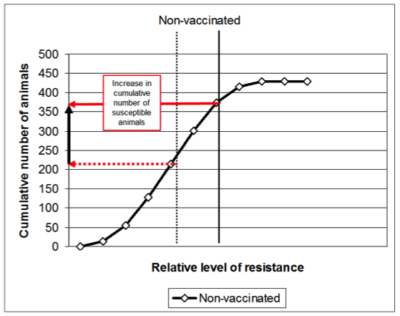 The number of animals that become sick can to a very large extent be influenced by two factors:

Increase in the number of disease-causing organisms that the animal is exposed to.

A decrease in the general resistance due to factors like underfeeding, especially during critical stages in the production cycle like just after calving.

The level of general disease resistance will play a larger (e.g.  “dirty cows” = endometritis) or smaller (e.g. lumpy skin disease) role depending on the type of disease-causing organism or factor involved.

Increased exposure for example can move the cut-off point to the right, meaning that a larger part of the population becomes susceptible to a specific disease.

An increase in exposure can have a dramatic effect on the extra number of animals that will become susceptible.

In this example it increased from 240 to 370 animals, due to an increase in exposure to the disease-causing organisms.

An example of how this occurs in practice is if a few animals in an unvaccinated herd become sick, the disease-causing organisms multiply in these animals and cause a very high exposure to the rest of the animals in the herd. 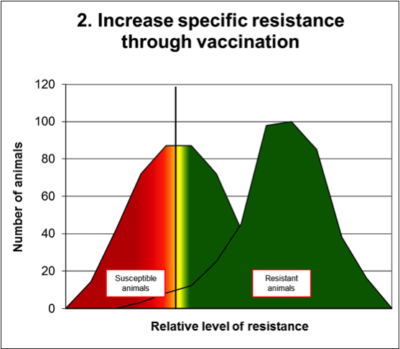 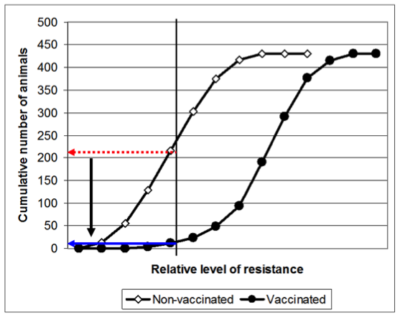 The most specific way  of increasing the resistance of an animal population is to vaccinate the animals against that specific disease. It effectively changes the level of resistance of the whole herd by moving most animals to the right of the cut off-point.

The level of resistance  in a vaccinated herd is depicted  by the graph on the right, versus the non-vaccinated herd on the left. It must be remembered that in most cases, a single vaccination  will not protect all the animals in the herd. Usually there are  individual animals that do not reach the required level of disease resistance (immunity) after only one vaccination. Vaccination of replacement heifers against Brucellosis is a good example to remember.Vaccination can have a dramatic effect on decreasing the number of susceptible animals.

In this example it decreased  from 240 to 10 animals. All vaccinations are not equally effective and the level of immunity (resistance) acquired depends on the type of vaccine, the timing of vaccination, and the potential of the individual animal’s own immune system to react to the antigenic stimulation provided by the vaccine. 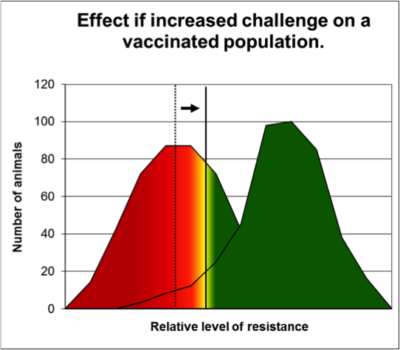 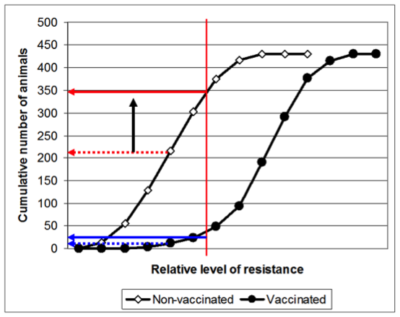 If there is a very high increase of exposure in the vaccinated herd, for example the buying in of disease carrying animals, a larger number of the vaccinated herd will become susceptible because the immune system of cattle with weak immunity will be overwhelmed.

BVD is a good example of a disease where carrier animals (persistently infected animals) are frequently bought in.Even though a few more animals in the vaccinated herd are now susceptible to the disease the effect is not as dramatic as it would be in an unvaccinated herd.

In this example the increase in susceptible  animals was as follows:

This shows that vaccination is still the most cost-effective way of  reducing the risk of disease outbreaks spreading through a herd on an un-controlled basis. 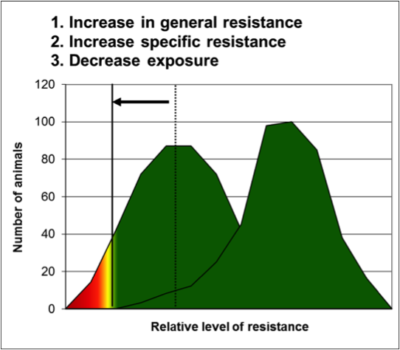 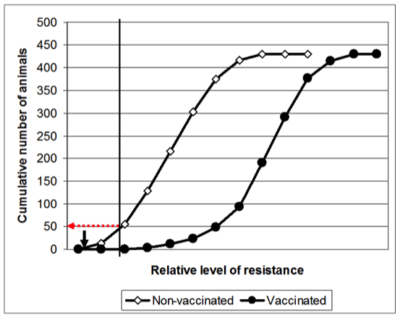 In most instances more than one approach to disease prevention must be employed in order to effectively control a disease, especially in a dairy herd that needs to produce on a daily basis.

Controlling a very complex disease like Staphylococcus areus mastitis in a herd is such an example.

If more than one approach to disease prevention is used effectively in combination, up to a 100% of a vaccinated herd can be protected.

It must still be appreciated that there is a large variation between the prevention approaches needed for all the different diseases that affect dairy animals. Some industry specific disease like claw infections will always occur, but need to be managed in such a way that as not to  exceed a set limit.

The fourth and final approach to disease prevention is to prevent exposure completely.

This is most important in the case of diseases for which there are no vaccines, no treatment available, or where the herd is currently free of this disease.

Most of our state controlled diseases can be named as examples:

Certain uncontrolled diseases from which the herd is currently free must also be prevented by this approach, for example Johne’s disease.

In this case a large part of the herd is very susceptible, either  because the animals were never exposed to this disease, or because no vaccination is available to increase the specific resistance of the animals.

General resistance will not protect all the animals in the herd against these diseases if new animals are introduced into the herd.

Disease reporting and an early warning system is needed to reduce the risk of new diseases entering a farm.

Very good biosecurity measures are needed to keep these diseases out of the herd which include:
– Only buying in tested disease-free animals.
– Limit the movement of people and trucks on the farm.
– Quarantine facilities for animals that enter the farm.
– Good perimeter fences and gates. 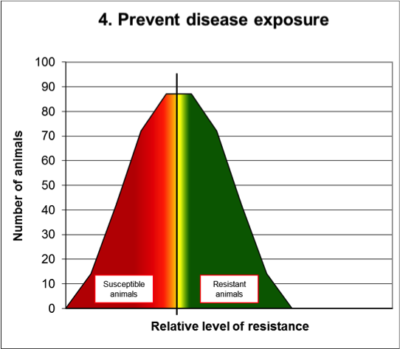