Implant failure relates to any factor the leads to loss of fracture stability or fracture alignment in the post-operative period after successful osteosynthesis.

The factors can be better characterised as either a failure at the bone implant interface or mechanical failure of the implant.

The bone implant interface is defined as the shared boundary between the implant and the bone. The interaction between the two surfaces is extremely dynamic, constantly changing from the time of implant placement until the time of healing. Bone repair around the implant is reliant on the local cellular activity. If excessive trauma (thermal or mechanical) occurs during insertion of the implant fibrous tissue will form and if vascularisation has not been established necrotic bone will develop next to the implant. Micro-motion (due to inadequate fixation or external forces transposed to the interface) can additionally lead to bone resorption and the formation of fibro-osseus tissue and predispose to failure of the implants.

Various forces (Van der Waals forces, hydrogen bonding, ionic bonding and covalent bonding) play a role in the bond between the implant and the bone. The interaction of water with the mineral and collagen phase of bone significantly impacts on the mechanical behaviour of bone and is involved in the toughening of the bone tissues. Bone resorption due to micromotion and infection will affect these forces.

The material implanted might also affect the long term outcome. Implants can be classified as biotolerant, bioinert or bioactive. Implants made from stainless steel are biotolerant meaning that these implant will always have some soft tissue that forms in the interface between bone and implant which will always predisposing these implants to micromotion. Titanium implants on the other hand, are classified as bioactive as they allow for full bony integration. The strength of each one of these materials is the ability of that material to resist the forces applied to that material. These forces can be compressive, tensile or shear.

We can prevent implant associated complications through adequate clinical examination, proper preoperative planning, good surgical skills and critical review of the post-operative radiographs. Each one of the above mentioned factors will be discussed as it pertains to implant failure in the post-operative period.

All patients should be liberally clipped and an adequate surgical scrub performed. Prophylactic antibiotic administration is advised if surgical implants are placed and is administered intravenously 30 – 60 minutes before the surgical incision. The antibiotic is repeated every 90 minutes for the duration of the surgery. The author’s antibiotic of choice is cefazolin at a dose of 20 mg/kg IV. These above mentioned steps are critical to prevent superficial and deep surgical site infection which might predispose to early implant failure due to resorption of bone at the bone implant interface. The prevention of infection becomes increasingly difficult with open fractures.

Open fractures are fractures where the bone is exposed to environmental contamination due to a disruption of the soft tissue covering the bone. In human surgery a significant decrease in infection rate is noted if a broad spectrum intravenous antibiotic is administered within 3 hours of the initial traumatic incident. Once the patients are medically stabilised, surgical debridement and wound lavage should be initiated. Early surgical stabilisation with soft tissue reconstruction of the soft tissue defect is widely accepted as the treatment of choice.

External coaptation (bandaging) of open fractures is not advocated. Although open factures have been successfully treated with bone plates the ideal is to select a fixation method that allows a surgical approach away from the initial wound. In addition, it is advised to remove the implants after bone healing has occurred. Bearing these factors in mind, external skeletal fixators are ideally suited for open fractures

Two orthogonal views of the long bone associated with the fracture is a prerequisite for adequate surgical planning. Radiographs of the contralateral limb might be beneficial to select the appropriately sized implant. By religiously planning all osteosynthesis procedures preoperatively, efficiency is increased and operative stress is decreased. Patients will benefit from the mental rehearsal of the operative plan by the improved outcome and safety of the procedure.

Operative planning can be divided into tactics and logistics. Where the tactics refer to the surgical steps employed to achieve the goals and logistics refers to the resources employed during the operation (for example the positioning of the patient, the proposed implants, need for a tourniquet or intra-operative  fluoroscopy. Good logistical planning will decrease surgical errors and improve operative ergonomics, thereby decreasing operative and anaesthetic time, which can have a direct influence on the development of surgical site infections.

In the absence of digital software which can be used for surgical planning, a plan can be made with  a goniometer, transparencies to lay over the radiograph, a felt tipped pen and a set of relevant templates of surgical implant (scaled correctly). The aim of the surgical planning should be to reconstruct the weight bearing axis in such a way that the normal alignment and function of the bone is maintained. Surgical planning also involves the anticipation of “hurdles” associated with the fracture repair. If these are encountered intra-operatively and no allowance has been made in advance, the outcome is generally a prolonged anaesthetic time, increased soft tissue trauma or technical errors.

The signalment of the patient is important to consider before selecting the correct osteosynthesis technique. Factors like weight, age, concurrent soft tissue injuries, presence of other illnesses and breed of patient (activity level and intended use) need to be considered. Patient age is a large determinant of the biological environment of the fracture; young animals have an active periosteum whereas geriatric animals have prolonged healing times. This biological environment is also dependant on the energy associated with the inciting cause, high velocity/ high energy forces generally leads to comminuted fractures with impaired vascularity.

Additionally, each fracture needs to be critically assessed in order to determine the mechanical forces acting on the fracture.  These forces are bending, rotation, compression (shear) and distraction forces. 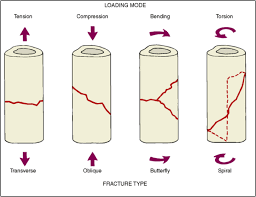 Figure 1.  Forces acting on a fracture.

These forces should be adequately neutralised by the implants in order for fracture healing to occur. Fractures that are subjected to compressive (shear) and distractive (tension) generally require internal fixation. Reconstruction of the bone column, when achievable, is preferred as this allows load sharing between the bone and the surgical implant protecting the implant from cyclic fatigue and failure before fracture healing. (Figure 2) During scenarios where the bone column cannot be reconstructed all the forces are transposed to the surgical implant predisposing them to failure. In the latter scenario the selected implants need to be larger and stronger to resist the forces acting on it until fracture healing has occurred. 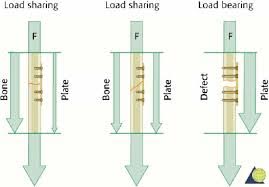 For the major long bones, it is respectively at the following locations:

In some instances, the ease of the surgical approach dictates the location of the plate for example in tibia fractures which are usually plated on the medial aspect. Implants placed on the tension surface are only stronger if the cortex on the compression side can be anatomically reconstructed. If this is not the case the forces acting on the implant will be changed to bending forces.

It is advisable to follow a structured course in the art of oesteosynthesis to understand the applications of the different techniques. Technical errors during implant placement cannot be over emphasised and most of the implant failures can be traced back to improper implant placement. These errors can include the improper placement of implant (e.g. a screw that is too short) or the placement of inappropriately sized implant. The latter can lead to implant failure if the implants are too small, or predispose to fracture of the bone if too large (even in the face of being applied appropriately)

When assessing a fracture repair, detailed attention needs to be paid to the fracture alignment, apposition and placement of the surgical implants. To be able to assess the alignment one needs to consider the angular and torsional displacement relative to normal anatomy. This is best done by evaluating the joint above and below the fracture and it is thus of cardinal importance that these joints be included in the postoperative radiographs. Contralateral radiographs can be used to assess the normal joint angles.

A certain degree of apposition between the fracture fragments are necessary in order for bone healing to occur. Granted that in certain scenarios, like the open but do not touch procedures, or the minimally invasive plate osteosynthesis (if done in severely comminuted fractures) one can expect the fracture haematoma to reabsorb and the fracture fragment to move closer to the central axis of the long bone with time. Along with the bone the implants it is also necessary to assess whether the implants will maintain stability of the fracture until healed. Critical review of the placement of the implants is necessary to determine whether the standard protocols have been followed for the placement of that specific implant.

Dealing with implant failures can be frustrating as failure can result in the loss of proper bone stock for implant placement, significant soft tissue trauma, additional costs, prolonged time to healing and increased patient morbidity. Adequate preoperative planning, good surgical technique and critical review of the osteosyntehsis will decrease the incidence of implant failure.