One of the most distinctive characteristics of the birds as a group (with a few notable exceptions) must be their ability to fly. (Fig 1) This ability has allowed them to take advantage of a myriad of ecological niches and has been one of the outstanding influences in their massive, global success as a family. 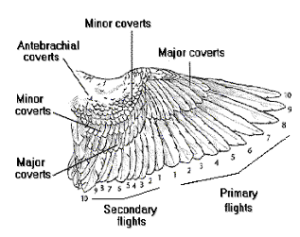 Although vitally important for foraging, escaping enemies and attracting mates in the wild, in a captive situation flight is often an undesirable and sometimes even dangerous ability. Flight allows escape from enclosures and a startled pet bird may fly straight into dangerous situations.

It is for this reason that many captive birds have their ability to fly limited in either temporary or permanent fashion. Note that I refer to limiting their ability, not removing it completely. In practically every situation, all that is needed is to prevent the bird from being able to gain height and thus escape. Birds (especially parrots) that are rendered completely incapable of flight may lose confidence and become stressed, withdrawn individuals. This is completely understandable, considering how central to every aspect of their natural lives this ability is.

Vets are commonly presented with sternal injuries, occurring when poorly flying birds crash to the floor and traumatise their breast skin and muscle. Most need to be surgically repaired.
Permanent flight limitation is often practiced on the waterfowl.

The technique of amputating the tip of one wing, thus preventing flight by leaving the bird permanently unbalanced is called pinioning. If performed correctly and humanely, there are few complications to this procedure. The technique differs, depending on the age and size of the bird.

Young ducklings (less than 1 week old) may be pinioned without anaesthesia by nipping off the last part of the wing. (Fig 2) A good antiseptic may be dabbed onto the cut surface. Older waterfowl should have either local or general anaesthetic before pinioning.

Fig 2: Use sharp shears and cut downwards in a straight line between the thumb of the wing and the tip.

A cable tie or elastrator band (the type used to dock lambs tails) is first placed around the wing, just above the position where it is to be amputated.(Fig 3) This prevents blood loss. Some people prefer to leave the tie on overnight and then pinion in the morning, others go ahead immediately. Remember; never include the ulula (thumb). This piece of wing must stay behind to protect the stump and is also important as a site for muscle attachment; the wing may droop if it is removed.

Fig 3: Placement of a cable tie around the wing to prevent bleeding prior to surgical pinioning.

Although it may seem like the perfect solution, parrots and other psittacine birds should NEVER be pinioned. The Exotic and Avian Practitioners Group of the South African Veterinary Association consider this practice unethical. Parrots are much more arboreal than waterfowl and thus need balanced wings give them the confidence to clamber around freely. Pinioned wings will cause them to fall heavily and greatly increase the chances of injury.

Parrots have extremely long life spans and bird vets, breeders etc. are frequently placed in the position of having to re-home problem parrots. These birds are practically impossible to place into a breeding flock if they have been pinioned, as they struggle to balance during mating and are incapable of performing any type of aerial courtship. Hen birds also need to be able to escape amorous cocks and may be severely bitten, even killed if they cannot fly.

Temporary flight limitation consists of trimming the flight feathers that give lift to the bird. Correctly performed, the procedure is quick, painless and allows the bird enough flight to glide safely to the floor and to flap away from cats, etc.

Several different wing-trimming techniques are in use. There is much controversy about the best technique. The following is the technique with which I am most familiar and is my personal favourite.

Fig 4: The first four to seven primaries on each wing are trimmed short, below the level of the secondaries. This prevents the rough shafts from rubbing on the flank skin and irritating the bird. The trimmed feathers are also not visible which gives a cosmetically pleasing, symmetrical trim.

Fig 5: The feathers are trimmed on the naked shaft, above the barbules for a neat and cosmetically pleasing appearance.

If performed just after moulting, feather trimming can be done as infrequently as twice a year, naturally if done before moulting, trims may be necessary more often.

Feather trimming should be customised to each individual bird. With the correct number of feathers trimmed, the bird should be able to flutter downwards from table height to land safely a few metres away. Should the bird be a strong flyer, more feathers may be trimmed. Some birds are safely grounded with as little as three or four feathers trimmed. Some need all 10, and even a few secondaries.

It is also important to allow young birds time to develop their flying skills and dexterity before trimming them. Birds that have confidence in their flying abilities are often more outgoing and confident than those that never learned to fly.

The technique where the two longest flight feathers are left long, has been associated with wing injuries as these two unsupported feathers may become trapped in the cage bars when the bird flaps, and break the birds carpus (wrist).

Light bodied birds may also be able to use these two feathers (the most important ones for creating “lift”) to fly away, even if the other feathers are trimmed.

Each situation is different should be evaluated individually as to which flight limitation technique will be most appropriate.