Fertility and health of a beef cattle herd can be built in stages over a five year period by focusing specifically on the management of replacement heifers.

Improving fertility is based on selection, for functional efficiency and careful management of replacement heifers from weaning, until the end of their second breeding season.

The long term herd health status is built around a complete vaccination program that should be followed with replacement heifers.

The Heifer Plan is Simple

Beef farmers who want to improve fertility in their herds, through selection and management can follow a structured heifer plan for five years. In this way they will build a herd selected for fertility (right type) that will calve over a concentrated calving season.The plan that should be followed is discussed below for heifers that will be mated at 2 years of age, for the first time. (A specific example is depicted in Table 1). A replacement heifer group is selected during weaning and compiled. All heifers must be individually numbered so that a record can be kept of the production performance of each animal. If individual identification and record keeping is not done, this is the perfect opportunity to start doing it. 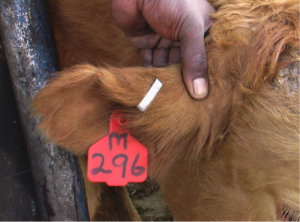 One and a half times the number of heifers that will be required for replacement heifers are selected. The goal of the selection is to select a uniform group of heifers that are functionally efficient. These heifers are retained as a separate management group to the end of their second breeding season. This is done according to a 3-year management plan that is worked out for the individual group and stretches from weaning until they are diagnosed as pregnant for the second time by the veterinarian. ( Table 1 is an example of such a 3-year management plan). 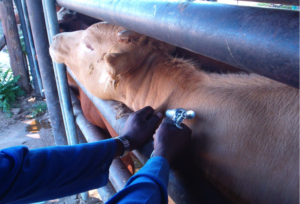 Replacement heifers should receive their first series of vaccinations, before weaning but if this was not done, they should be vaccinated against all kinds of Clostridia (black quarter, botulism, anthrax) and where appropriate, against red water and tick-borne gallsickness. Vaccination against seasonal viral diseases must also be done in heifers. This annual vaccination followed by the yearly booster vaccinations is the best long-term investment in the development of disease resistance in the whole herd. The vaccinations required on a specific farm should be discussed with the local veterinarian. Weigh heifers at weaning, 12, 18, 24 months of age and again at the start of their breeding season. Ensure that growth is maintained and nutrition adjusted so that the heifers can reach 70% -75% of their expected mature weight (critical mating weight) at the beginning of the first limited breeding season. 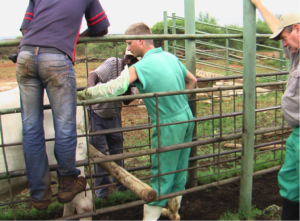 When heifers are weighed at 24 months the vet can also do an evaluation of their reproductive systems by rectal examinations. Cull heifers that did not reach the minimum breeding weight and the heifers with an underdeveloped reproductive system. This income will pay for the examination and supplements that will be needed for the rest of the group.

Ensure that there are enough fertile bulls (1:20) that are free of sexual diseases. Replacement heifers are ideal candidates for a synchronization and AI program that could lead to faster genetic progress and further shortening of the first breeding season. If synchronization and AI was not previously used, a uniform group of well-grown heifers is the perfect opportunity to start using this technology. The veterinarian will do a pregnancy diagnosis at the end of the 90 days breeding season. Only the heifers that became pregnant in the first 42 days of the breeding season will be diagnosed as pregnant. Only the heifers that became pregnant within the first two oestrum periods (42 days) are selected as replacement heifers. That is the most important selection criteria for a fertile breeding herd.  There must be good supervision when heifers calve for the first time. This is one of the main reasons why only the heifers that became pregnant in the first 42 days are selected as replacement heifers. Good supervision and nutrient management for heifers from calving until after the second mating season is the key to success on a beef cattle farm.

By mainly focusing on the selection and management of replacement beef heifers, farmers can build a highly fertile herd within 5 years.

Individual heifer groups are managed according to a plan that starts when the heifers are weaned and lasts until they are confirmed  pregnant for the second time by the veterinarian.

This plan is repeated annually for each new group of replacement heifers, until the entire herd is replaced with the heifers selected and managed for fertility. 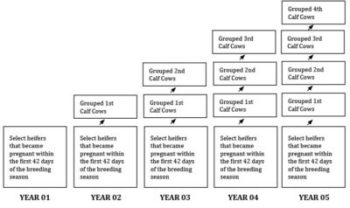