Vaccination against helminths is a control concept that is currently being successfully applied in the control of Dictyocaulus viviparus (lungworm) infection in cattle in some parts of the world. Similar attempts have been made to develop vaccines against several economically important gastrointestinal nematodes in small stock and cattle (Ekoja & Smith 2010; Emery & Wagland 1991; Halliday & Smith 2011; Miller & Horohov 2006).

The vaccine strategy that currently promises the most success largely ignores the mechanisms of natural immunity and attempts to direct responses towards external antigens (somatic antigens) on the outer surface (surface antigens) and in excretions and secretions (excretory-secretory antigens, ES antigens) of helminths. Candidate-protective antigens have so far been identified on the surface of oncospheres from Taenia and Echinococcus sp, and excretions and secretions of Fasciola hepatica, H. contortus and Ostertagia ostertagi (Smith & Zarlenga 2006). 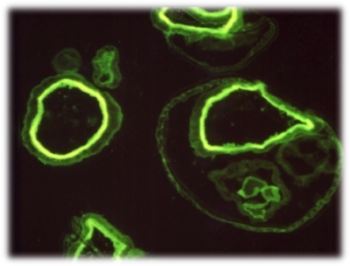 Circulating antibody, detected with a fluorescein conjugate, in lambs vaccinated with the gut membrane proteins purified from adult H.contorus binds to the microvillar surface of the instestinal cells of adult parasites. (Knox et al 2003)

In the case of blood-feeding Haemonchus sp, the luminal surface of the intestine has been a particularly rich source of suitable target molecules (Smith & Zarlenga 2006).

In the most promising attempt to develop a vaccine against H. contortus in small stock,  highly protective intestinal cell-membrane antigens, namely H-gal-GP and H11, have been identified and isolated at the Moredun Research Institute (Emery & Wagland 1991; Knox & Smith 2001; Smith 2008).

H-gal-GP and  H11 in Perspective

Haemonchus galactose-containing glycoprotein complex (H-gal-GP) binds selectively to lectins and has a specificity for N- acetylgalactosamine. In each experiment, immunisation with H-gal-GP significantly reduced faecal egg counts (FECs) and wireworm burdens in vaccinated sheep compared to the unvaccinated controls. Immunisation was also significantly more effective against female than against male worms, as shown by the abnormal sex ratio of the populations recovered from each vaccinated group (Smith et al. 1999).

H-gal-GP is an integral membrane complex of proteases derived from the microvilli of H. contortus intestinal cells. It is hypothesised that in vaccinated sheep, H-gal-GP antibodies ingested with the blood meal interfere with the worms’ digestion and leads to starvation of the parasites (Smith 2007).

H11 is an integral membrane glycoprotein complex expressed exclusively in the intestinal microvilli of the parasitic stages. It is a highly effective immunogen against H. contortus challenge and has resulted in a 90% reduction of faecal egg counts and 75% reduction of worm burdens in vaccination trials (Newton & Munn 1999). The protection is closely correlated with systemic IgG titres to H11 (Munn et al. 1997). H11 has several desirable properties. It is an effective immunogen in young lambs (Tavernor et al. 1992) and is effective in a range of sheep breeds and against anthelmintic-resistant H. contortus strains (Newton & Munn 1999).

The vaccine antigens (H11 and H-gal-GP) are ‘hidden antigens’, since the immune systems of small stock is not normally exposed to antigens of the luminal surface of H. contortus intestinal cells (Smith 1993). The immunity conferred by the vaccine does not interfere with the development of natural immunity (Smith & Smith 1993), but rather provides protection when the latter is acquired (Le Jambre et al. 2008).

Strong evidence has been found that the protection obtained is antibody mediated. Antibodies from sheep protected by the vaccine can inhibit the protease activity of both H11 and H-gal-GP in vitro (Newton & Meussen 2003; Ekoja & Smith 2010; Le Jambre et al. 2008) and it is assumed that this also happens in vivo.

The concept of vaccination with proteins derived from gut membrane has also proved to be effective in the control of haematophagous arthropods such as ticks. A critical internal component of the parasite, such as a molecule on the gut cell surface, is first isolated and then used to vaccinate the host. In an ectoparasite feeding on blood or tissue fluid and wound exudate, subsequent uptake of blood or other fluid containing antibodies from the host that is accompanied by, for example complement and cells, can lead to immunological damage to the host. This approach is the basis of the B. microplus vaccine (Willadsen 1999).

Following vaccination, an antibody response involving high-titre circulation is raised. Antibodies are ingested with the blood during the feeding of the helminths and bind to functional proteins on the brush border of intestinal cells, which compromises digestion. This eventually leads to starvation, loss of fecundity and weakness. Finally, the helminths detach and are expelled (Smith & Zarlega 2006).Vaccine-induced immunity can be passively transferred by serum or colostrum (Smith 1993, Andrews et al. 1997). It has been shown that serum antibody titres are highly correlated with protection (Le Jambre et al. 2008).

Specificity of the Vaccine

Effective vaccination would be an alternative control measure to address haemonchosis in small stock and to limit the reliance on anthelmintics. The additional benefit would be to slow down the development of anthelmintic resistance and to enable the small stock farming industry in South Africa to remain productive and competitive.

It is recommended that vaccination starts 9 weeks prior to the Haemonchus season. Three injections 3 to 4 weeks apart are needed to induce protection, after that, immunity can be maintained by boosters given at 6 to 8 week intervals until the first frost lowers infection rate. It is of utmost importance to ensure primary immunisation is in place either before the challenge starts or to minimize or lower infection using an effective anthelmintic during this phase, a faecal egg count of less than or equal to 1000 eggs per gram is acceptable. The effect of peri parturient relaxation of resistance in pregnant ewes should be taken into account and it is therefore recommended to ensure immunity is in place at least 3 weeks before the lambing season starts.

The results of the registration trial indicated that a strong protective immunity develops in vaccinated sheep. After three vaccinations, given three weeks apart, the experimental vaccine Wirevax® stimulated a strong circulating antibody response. Statistically, the mean antibody titres of the vaccinated sheep were significantly higher than those measured in the controls. This immune response was associated with reductions in faecal egg counts and worm burdens in vaccinated sheep compared to control sheep. In sheep challenged immediately after the third vaccination, the efficacy based on worm counts was 86.93% and on faecal egg counts were reduced by 95.59%. In those sheep that were challenged 30 days after the third vaccination, the efficacy was 80.66 % on worm counts and faecal egg counts were reduced by 80.6%. It can be concluded that three vaccinations given at three-week intervals will aid in the control of haemonchosis in sheep and will significantly limit new infections for 30 days.

Barnes et al. (1995) developed a mathematical model for simulating Trichostrongylus populations in grazing sheep and compared the use of theoretical vaccines of nominal efficacy with the use of conventional control methods based on anthelmintic treatment. It was concluded that vaccines based on hidden antigens conferred a protection of 80% of the flock with 80% efficacy would ensure better control than a conventional anthelmintic programme. The results of this registration trail correlate with findings of other studies using this antigen vaccine combination (H-gal-GP and H11) (Le Jambre et al. 2008). Field studies conducted over 11 months under natural grazing were conducted in South Africa and gave similar protection levels to what was found here (Smith et al. 2001).

This H-gal-GP, H-11 containing vaccine was registered in 2014 in Australia and is marketed commercially as Barbervax®. In South Africa, the registration for Wirevax® was obtained in November 2016.

Wirevax was launched to a small group of sheep farmers with known worm resistance problems in their flocks. The results seen are comparable with the studies mentioned above. Number of drenching per season decreased significantly and would normally only be required if the worm challenge during the primary immunisation was too high. Mortalities hypoproteinaemia (bottle jaws) and anaemia decreased and overall health and production improved. Second year users of Wirevax reported even less anthelmintic use and vaccinations per season. The Wirevax vaccination and monitoring program , provided by Afrivet, includes a reminder system through the Wirevax app, regular faecal egg counts and FAMACHA monitoring of sample sheep. This ensure timeous advice with regards to pasture management, drenching for other roundworm or tape worm species and coccidiosis.

Wirevax is part of the holistic worm management system of the sheep farmer and proven itself to ensure sheep production in South Africa and Australia, even with resistance wireworm present in the flock